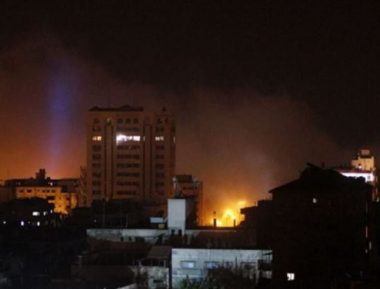 The Israeli Air Force fired missiles, on Wednesday at dawn, into several areas, west of Gaza city and Beit Lahia, in the northern part of the besieged and improvised Gaza Strip, wounding at least seven Palestinians, including one who suffered a serious injury.

Medical sources said the soldiers injured seven Palestinians, including one who suffered life-threatening wounds, after the army fired missiles into two areas northwest of the Gaza Strip. The attack also led to excessive damage to several homes and structures near the targeting sites.

The sources added that all wounded Palestinians were moved to the Shifa Medical Center, west of Gaza city, and that one of the injured remains in a critical condition.

In addition, the air force also fired missiles into a site, north of Beit Lahia, in the northern part of the Gaza Strip, causing excessive damage to the building, and several surrounding homes.

In a statement, the Israeli army said that the attacks came in response to a homemade shell which was fired from Gaza into the Hof Ashkelon Regional Council, during late night hours, but landed in an open area, causing no damage or injuries.