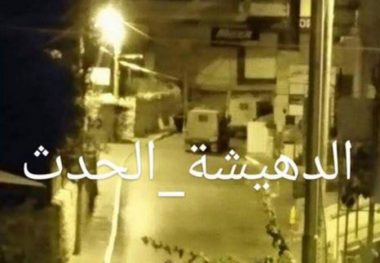 Dozens of Israeli soldiers invaded, on Wednesday at dawn, the Deheishe refugee camp, south of Bethlehem, and abducted two young Palestinian men, after shooting them.

Media sources said the soldiers fired dozens of live rounds during the invaded, and abducted Abdul-Aziz Ahmad Arafa and Raed As’ad Salhi, 21, after shooting and injuring them.

Salhi suffered a life-threatening injury, and the soldiers prevented local medics from approaching him.

Much later, the soldiers took Salhi to an unknown destination, and then he was moved to Hadassah Israeli Medical Center, in occupied Jerusalem.

The Israeli army said one of its soldiers was injured during the invasion, after exchanging fire with Palestinian fighters.

The army added that the wounded soldier was moved to a hospital, and that it is investigating the incident.