Army Demolishes A Home And A Stable, Uproots A Farmland, In Jerusalem 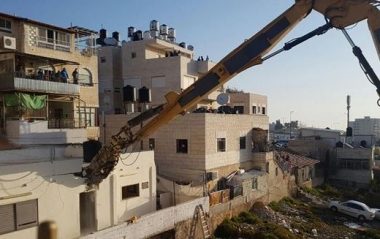 Israeli soldiers demolished, Tuesday, a Palestinian home in Beit Hanina neighborhood, north of occupied East Jerusalem, a stable for horses in Silwan town, and bulldozed a farmland in Za’im town, east of Jerusalem.

Dozens of soldiers, accompanied by bulldozers, invaded Beit Hanina neighborhood, after surrounding and isolating it, and demolished a home, reportedly for being “built without a permit.”

The soldiers also invaded Wadi Yasoul neighborhood in Silwan town, south of the Al-Aqsa Mosque in Jerusalem, and demolished a stable for horses.

Furthermore, the soldiers bulldozed and uprooted a farmland, owned by Tareq Abu Sbeitan, in Za’im town, east of Jerusalem, without a warrant or even a explanation.

Earlier Tuesday, the soldiers abducted two young Palestinian men from their homes, in Zabbouba village, west of Jenin, in the northern part of the West Bank.

On Tuesday at dawn, the soldiers carried out massive invasions and violent searches of homes in different parts of the West Bank, including occupied East Jerusalem, and abducted twenty-four Palestinians, including a woman, former political prisoners, in addition to a father and his four sons.