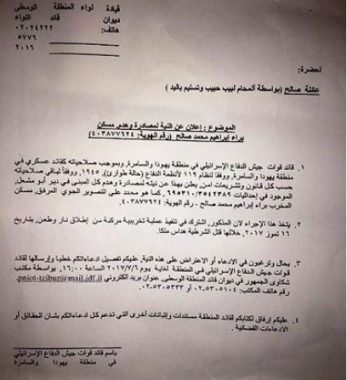 Israeli soldiers invaded, on Tuesday at dawn, the towns of Deir Abu Mashal and Silwad, north and east of the central West Bank city of Ramallah, and handed demolition ordered targeting the homes of three Palestinians, who were killed in June after killing an Israeli officer, and a similar order against the home of a detainee from Silwad, who was taken prisoner after the army claimed he deliberately rammed soldiers with his car, killing one.

The soldiers invaded Deir Abu Mashal town, after surrounding it, and broke into the family homes of Bara’ Ibrahim Saleh, 18, Adel Hasan Ankoush, 18, and Osama Ahmad Ata, 19, who were killed in June, after killing an Israeli soldier and wounding several others.

The soldiers then handed the three families demolition orders targeting their homes.

The soldiers also invaded the family home of Malek Ahmad Hamed, who was taken prisoner in April after killing an Israeli soldier, in what the army claimed “a deliberate car ramming attack,” and handed the family a demolition order against their home. Hamed is from Silwad town, east of Ramallah.

The four families were granted 48 hours to appeal against the demolition orders with the Civil Administration Office, run by the Israeli military in the occupied West Bank.