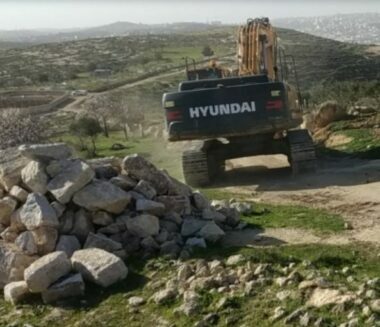 Israeli soldiers demolished, on Wednesday afternoon, a Palestinian home in Khallet al-Forn area, near Birin village, south of Hebron in the southern part of the occupied West Bank.

The National and Popular Committees in Yatta have reported that the soldiers demolished a 200 square/meter under-construction home owned by Jamal Rajab Sarsour.

The Committee added that the army surrounded the area before demolishing the property under the pretext of not obtaining a permit from the so-called “Civil Administration Office,” the administrative branch of Israel’s illegal occupation of the West Bank.

According to the Israeli Committee Against House Demolitions (ICAHD) the Israeli army demolished more than 120.000 Palestinian homes and structures since the year 1948, and added that, in 2020, the soldiers demolished 856 structures and displaced 1.014 Palestinians in the West Bank (including East Jerusalem) alone, affecting about 5.615 Palestinians.

In December of 2020, the army demolished 67 structures displacing 50 Palestinians and affected more than 410.