OCHA: Data on demolition and displacement in the West Bank 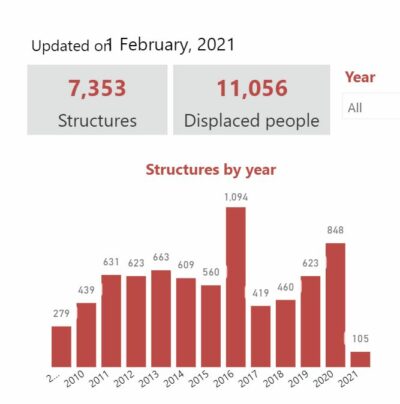 The United Nations Office for the Coordination of Humanitarian Affairs In the Occupied Palestinian Territory (OCHA-OPT): The figures below reflect the demolition of Palestinian-owned structures and the resulting displacement of people from their homes across the West Bank since 2009. Together with other policies and practices, the threat of destruction of homes and sources of livelihood contributes to the generation of a coercive environment pressuring people to leave their areas of residence.

Click, tap or hover over charts to interact with data or click here for more breakdowns(link is external).

The figures presented here are based on visits that OCHA carries out as part of an initial assessment of people’s humanitarian needs. They are saved in a database that informs multiple agencies’ decisions on humanitarian assistance they provide, thereby allowing timely and targeted responses. Typically, demolitions are reflected in this page within 48 hours of the incident.