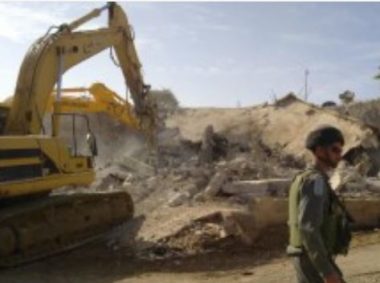 Several Israeli army jeeps invaded, on Thursday morning, the village of Khirbit Yanoun, southeast of the northern West Bank city of Nablus, and demolished one home, during training.

Media sources in Nablus said the soldiers demolished the home of Adwan Bani Jaber, in the ad-Dowwa area, where the army has been conducting live fire training for the past four days.

Jaber family had to abandon their 90 square/meter home in 2013, due to ongoing assaults carried out by fanatic Israeli colonists, illegally living near the area, and frequent military drills.

The family never received any demolition notices or orders from the military, or any other Israeli department, and had no idea the army intended to destroy their home.

In related news, a group of Israeli colonists attacked Palestinians, picking their olive trees near the illegal Elon Moreh colony, built on Palestinian lands near Deir al-Hatab village, south of Nablus, before the residents managed to remove the assailants.