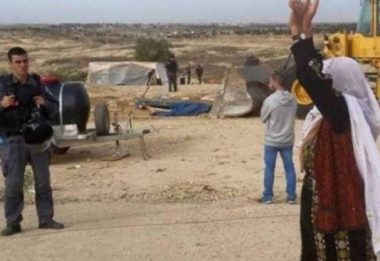 Israeli soldiers and police officers demolished, Thursday, the al-Arakib Bedouin village in the Negev, for the 174th consecutive time, and for the fourth time this year alone.

Residents of al-Arakib stated that the soldiers and officers demolished and removed their tents and sheds, which were used to house them, and shelter them from the cold, amidst the stormy weather of the Negev.

They added that the police recently abducted and imprisoned a local Sheikh and social figure, identified as Siyah at-Touri, in addition to several other villagers, after accusing them of “occupying state land.”

It is worth mentioning that Israel started targeting the Bedouin village since the year 2000, in an attempt to displace and relocate them, as part of the so-called “Negev Development Plan,” which aims at transferring the Bedouin to build resorts and houses for Israeli settlers.