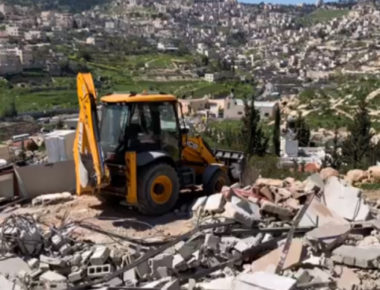 They added that the soldiers abducted Bassam Eid Hawarin, from his home in ath-Thaheriyya, and Azzam Khalil Shehda, from Yatta.

The soldiers also installed roadblocks on roads leading to ath-Thaheriyya, in addition to Hebron city and the al-Fawwar refugee camp, before stopping and searching dozens of cars, and interrogated many Palestinians while inspecting their ID cards.

Furthermore, the soldiers demolished a wall, surrounding a private Palestinian land of twelve dunams, near the al-Hijra village, and owned by Palestinians from al-Kbeiji family, allegedly for being built without a permit from the Israeli side.

The soldiers also confiscated a shed owned by a resident of the al-Hijra village.