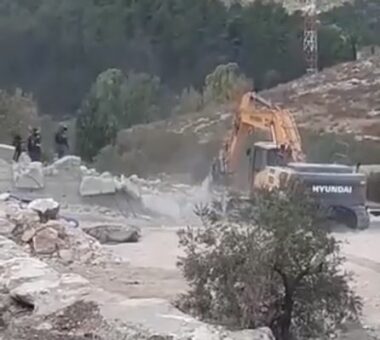 The head of Ni’lin Village Council, Emad al-Khawaja, stated that several army jeeps and a bulldozer invaded the village in the morning, and demolished a wall surrounding a land, owned by Hussein Fayez al-Khawaja.

He added that the soldiers handed the demolition order to the Palestinian nearly a month ago, before he filed an appeal that is still pending, however, the army went ahead and demolished the wall even though no ruling has been made.

Walid Assaf, the head of the Colonization and Wall Resistance Commission, stated that Israeli soldiers were present in the area during the attack, but did not remove the colonists.