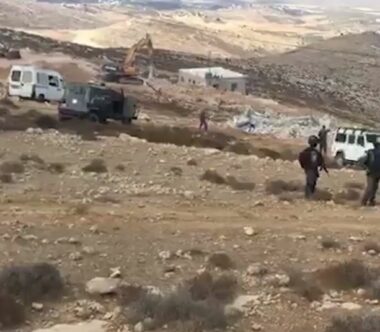 He added that the army claimed the home was being built without a permit from the “Civil Administration Office,” the administrative branch of Israel’s illegal occupation of the West Bank, although it was approved by the local council.

He added that the soldiers also demolished two well, used by the Palestinians to collect water from the rain, for drinking and for irrigating their lands.

The soldiers also removed fifteen electricity poles, which were installed by the local council in the same area.

It is worth mentioning that the soldiers recently handed two demolition orders, targeting homes owned by Mohammad Mahmoud al-Qteil and Jaber Yasser Abu Awad, in the same area of the town.

The two Palestinians filed appeals with Israeli courts against the demolition orders and are still waiting for a hearing date to be set.

In related news, the soldiers invaded Palestinian agricultural lands in Battir village, west of Bethlehem, south of occupied Jerusalem in the West Bank, and demolished retaining walls surrounding them, in addition to uprooting the plants.