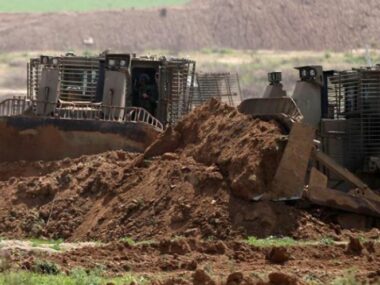 Several armored Israeli vehicles, including bulldozers, invaded Palestinian agricultural lands, and uprooted them, east of the al-Maghazi refugee camp, in central Gaza, in addition to firing many live rounds at the farmers.

Media sources said the soldiers uprooted the lands, close to the perimeter fence, east of the refugee camp.

They added that the soldiers fired many live rounds at Palestinian farmers in the invaded area, forcing them to leave in fear for their lives.

It is worth mentioning that the soldiers frequently invade and bulldoze Palestinian lands across the fence, along the eastern parts of the Gaza Strip, in addition to installing sand mounds and firing at the farmers.