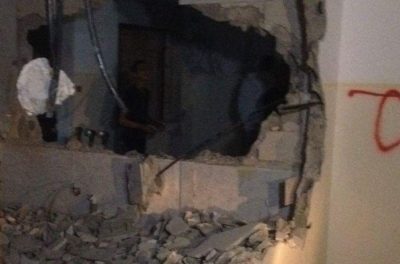 Israeli soldiers invaded, on Tuesday at dawn, Beit Forik town, east of the northern West Bank city of Nablus, and demolished an apartment of an imprisoned Palestinian, believed to be behind a shooting attack that led to the death of two Israeli settlers last year. During the invasion, the soldiers clashed with dozens of Palestinians and injured at least ten.

Media sources in Nablus said the soldiers surrounded Khallet al-Eman area, in Beit Forik, before storming the family home of Amjad ‘Oleiwi, 48, then abducted and detained his family for several hours, and demolished their home.

The sources added that clashes took place between the soldiers and dozens of local youngsters, who hurled stones and empty bottles at the invading army vehicles, while the soldiers fired dozens of gas bombs and rubber-coated steel bullets.

Medical sources said dozens of residents, including many children, suffered the effects of teargas inhalation, and received the needed treatment, while one of them was moved to a hospital, after suffering moderate wounds. It is worth mentioning that, last week, the Israeli High Court rejected an appeal against the demolition of the ‘Oleiwi family home, and said that the man “had a very serious role in the deadly shooting attack.”

Salah ‘Oleiwi, the brother of Amjad, said the family filed a total of four appeals against the demolition, but were unable to save their home.

The family lived in a residential building in Khallet al-Eman area; the detained Palestinian is a married father of eight; two boys and six girls.

The shooting ‘Oleiwi is accused of planning, took place took place on October 1, 2015, near Itamar Israeli colony, built on Palestinian lands near Nablus. The victims of the shooting have been identified as Eitam Henkin, and his wife Na’ama, both in their thirties.