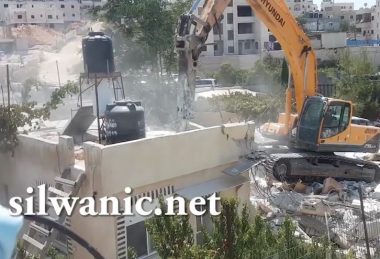 Israeli soldiers demolished, on Wednesday evening, a Palestinian home in Beit Hanina neighborhood, in occupied East Jerusalem, rendering the family homeless despite a pending appeal with an Israeli court.

The Wadi Hilweh Information Center in Silwan (Silwanic) said dozens of soldiers, and officers, invaded Beit Hanina, and forcibly removed the family, leading to scuffles, before demolishing the property.

The demolished property is owned by Sana’ Farraj and her family of eight; it was built sixteen years ago.

It added that the soldiers also abducted two young men during the invasion and destruction of the Palestinian home.

Silwanic stated that the family has already paid high fines and fees, exceeding 250.000 Shekels, in addition to the costs of appeals in Israeli courts. It also said that the family headed to the court again, appealing against the final decision to demolish their property, and asking for postponing the destruction, but the officers went ahead and demolished it, without allowing them to remove all of their furniture and belongings.

It is worth mentioning that the Jerusalem City Council did not respond to the appeal, and failed to deliver prior notices to the family.

In addition, the soldiers demolished a wall near the Professional Associations Complex, in Beit Hanina.

Earlier on Wednesday, the soldiers invaded Silwan town, south of the Al-Aqsa Mosque in Jerusalem, and demolished a Palestinian home.