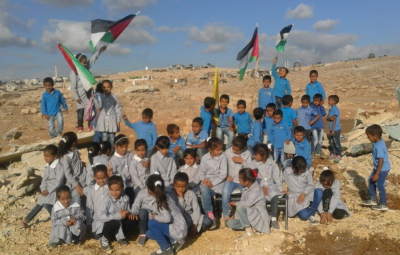 Local sources said several armored military vehicles, and bulldozers, invaded the village, after surrounding it from all directions.

The sources added that hundreds of soldiers were deployed in at-Tour, and around it, completely encircling it, and prevented the Palestinians from entering of leaving.

The soldiers then demolished four apartments belonging to Ahmad Abu Al-Hawa, and his brothers; the building was constructed and furnished five years ago.

Abu al-Hawa said the army is implementing the Israeli policies targeting the existence of the indigenous Palestinians in the occupied city, by constantly demolishing homes and structures.

The soldiers also invaded the Abu Nowwar Bedouin community, east of Jerusalem, and demolished a wood and tin classroom, allegedly for “being built without a permit.”

The representative of Abu Nowwar Bedouin community Daoud al-Jahalin told the WAFA Palestinian news agency that the classroom used to provide education to 45 boys and girls.

He added that, several days ago, the soldiers photographed the classroom, after invading the local school.

Al-Jahalin stated that Israel is trying to remove the community from its 500 Dunams land, that belong to Abu Dis town, so that it can build and expand the illegal colonies in the area, as part of the E1 project which will eventually isolate the northern part of the West Bank from the south.

He also said that around 600 persons live in Abu Nowwar, and are facing displacement, especially after Israel issued more than 250 orders to remove them and confiscate their lands.