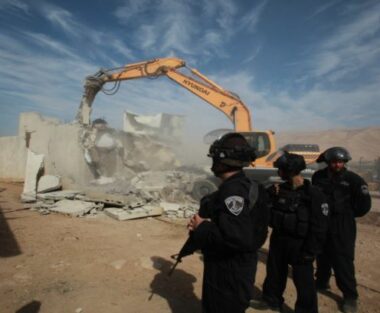 Local sources said the soldiers demolished a 500 square/meter under-construction home, and a water well that can hold up to 200 cubic meters of water, owned by Jawdat Mohammad Rajabi.

They added that the soldiers also caused damage to construction materials and supplies during the attack.

In related news, the soldiers invade Kharsa village, west of Hebron, before storming and ransacking many homes, in addition to installing military roadblocks and interrogating many Palestinians while inspecting their ID cards.

In Nablus, in northern West Bank, the soldiers invaded Zawata village, west of the city, and handed orders halting the construction of three homes, under the pretext of being built without a permit from the so-called “Civil Administration Office,” the administrative branch of the illegal Israeli occupation.

Two of the homes are almost ready, as they have been completely built but need final touch-ups and some interior work.