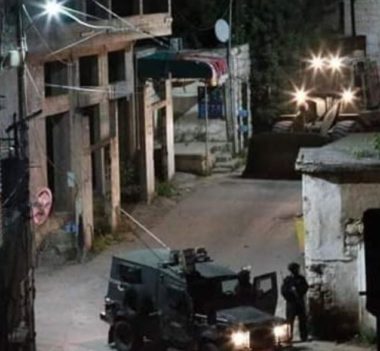 Israeli soldiers demolished, on Wednesday at dawn, the family home of Omar Abu Laila, in the az-Zawiya town, west of Salfit, in Central West Bank.

They added that the army surrounded the town, and declared it a closed military zone, preventing the Palestinians from entering or leaving it.

The invasion was carried out by at least thirty armored Israeli military vehicles, including bulldozers.

During the invasion, Israeli Army Corps of Engineers  proceeded to wire the property, and detonated it several hours later.

They added that the soldiers also attacked, and fired gas bombs and concussion grenades, at Palestinian journalists, trying to document the invasion and demolition.

The detonated home was a four-story building; the explosion leveled the building, and caused damage to many surrounding homes.

Prior to demolishing it, the soldiers stormed and searched dozens of surrounding homes, and forced at least fifty families out of their homes.

The invasion and demolition lasted for more than seven hours, while dozens of Palestinian youngsters hurled stones at the invading soldiers, who fired many live rounds, gas bombs and concussion grenades.

Talking to the Palestinian TV, Na’im Shqeir, the mayor of az-Zawiya, described the invasions and the demolition as a “barbaric act” targeting dozens of families, and aiming at terrorizing them.”

Omar Abu Laila, 19, was killed by Israeli soldiers, on March 19th, 2019, after the soldiers surrounded a home, and exchanged fire with him in Abwein village, near the central West Bank city of Ramallah. The soldiers took his corpse and never handed it back to his family.

The decision to demolish the family home was made shortly after the stabbing incident.

The demolition of homes is an act of collective punishment illegal under International Law, and Fourth Geneva Convention and various international treaties.

Article 33 of the Fourth Geneva Convention of 1949 states: “Individual responsibility, collective penalties, pillage and reprisals. No protected person may be punished for an offense he or she has not personally committed. … Under the 1949 Geneva Conventions, collective punishment is a war crime.

It prohibits “penalties of any kind inflicted on persons or entire groups of persons, in defiance of the most elementary principles of humanity, for acts that these persons have not committed.”