Army Injures 27 Palestinians, Including A New Born Baby, In Nablus 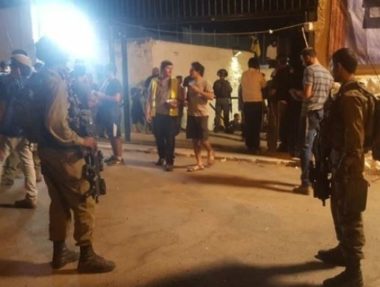 Israeli soldiers invaded, on Wednesday at dawn, the eastern area of Nablus city, after accompanying dozens of illegal colonialist settlers into Joseph’s Tomb, and fired at Palestinian protesters, wounding at least 27, including a new born baby.

The Palestinian Red Crescent Society (PRCS) in Nablus said its medics provided treatment to seven Palestinians, who were shot with rubber-coated steel bullets, including two who were shot in the head, before they were rushed to Rafidia governmental hospital.

It also said that at least fourteen Palestinian, including baby, only two months of age, suffered the effects of teargas inhalation, when the army fire a barrage of gas bombs at protesters, as well as several surrounding home.

The baby was rushed to Rafidia hospital after asphyxiating due to gas inhalation, and was instantly provided with the urgently needed medical attention.

Many Palestinians suffered various cuts and bruises, and received the needed treatment.

Media sources in Nablus said dozens of buses, filled with colonialist settlers, and accompanied by many army jeeps, invaded the eastern area of the city, and headed towards “Joseph’s Tomb.”

The WAFA Palestinian News Agency said at least 15000 colonialist settlers, accompanied by members of Knesset of the Likud Party of Prime Minister Benjamin Netanyahu, participated in the invasion,  including Yossi Dagan, the head of “Settlements Council” in northern West Bank.

It is worth mentioning that the Palestinians believe Joseph’s Tomb to be the funerary monument to Sheikh Yousef Dweikat, a local religious figure. Others believe that the tomb belongs to the Biblical patriarch Joseph revered by Jews, Samaritans, Christians and Muslims alike.