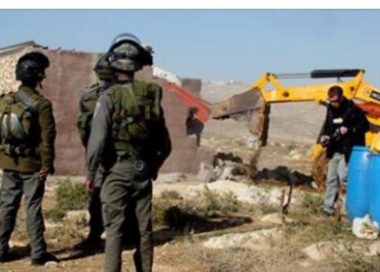 Hasan Breijiyya, the head of the Colonization and Wall Resistance Commission in Bethlehem, said the soldiers, accompanied by an armored D9 military bulldozer, invaded the area and demolished the three rooms, owned by Monther Issa Salah, Sa’ad Ahmad Salah and Habbas Salah.

He added that the army is alleging that the rooms were built without permits from the Israeli “Civil Administration Office,” the administrative branch of Israel’s illegal occupation of the West Bank.

Breijiyya stated that the army has been subject to the frequent Israeli violations, including home and property demolitions, especially after the military closed the road leading to it, and started preventing the Palestinians from sleeping in their homes.

Israel is trying to illegally annex the lands in that area, and demolished homes and other property, in order to expand its illegal colonies, built in direct violation of International Law and the Fourth Geneva Convention.

In related news, the soldiers demolished a Palestinian home in Beit Hanina neighborhood, north of occupied East Jerusalem, allegedly for being built without a permit from the City Council, the Wadi Hilweh Information Center in Silwan (Silwanic) has reported.

Earlier this week, the Israeli Supreme Court rejected an appeal by Palestinian families from Silwan, allowing the demolition of 500 homes and commercial buildings, which were constructed without an Israeli-issued permit, to take place.