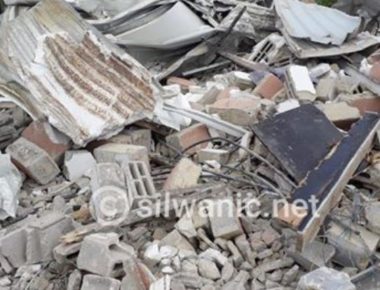 Israeli soldiers demolished, Wednesday, a Palestinian home in Beit Hanina neighborhood, north of occupied East Jerusalem, allegedly for being built without a permit from the City Council, the Wadi Hilweh Information Center in Silwan (Silwanic) has reported.

Several days ago, the soldiers and employees of the City Council, invaded the home of Omran al-Masri, and informed him of the decision to demolish his property, and he hired a lawyer who managed to postpone the demolition for one month.

However, the soldiers invaded the property, Wednesday, and forced the family of seven out of their home, which was built eleven years ago, before demolishing it.

On Wednesday morning, the soldiers demolished stores, a kitchen and a residential room, owned by Burqan family, and a horse ranch, owned by al-Qaaq family, in Silwan town, south of the Al-Aqsa Mosque in occupied Jerusalem.

It is worth mentioning that Israel has issued orders for the demolition of more than eighty Palestinian homes in Silwan.

Earlier this week, the Israeli Supreme Court rejected an appeal by Palestinian families from Silwan, allowing the demolition of 500 homes and commercial buildings, which were built without an Israeli-issued permit, to take place.