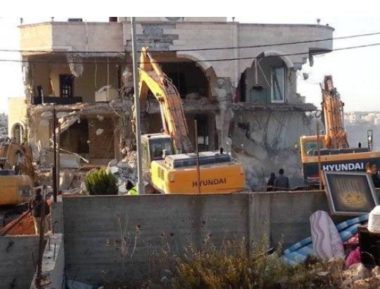 Israeli soldiers demolished, on Tuesday evening, three Palestinian homes, including an under-construction property, and a storage room, in Silwan town, south of the Al-Aqsa Mosque, in occupied Jerusalem.

The soldiers demolished two homes, including one that was still under-construction, and a storage room, owned by Jamal Yahia Edkeidik, and his son Ma’moun, allegedly for being built without a permit.

In related news, the soldiers demolished a 100 square/meter home in Ras al-‘Amoud, in Silwan town, without a prior warning, also under the allegation of being built without a permit.

The demolished property, owned by Feryal Ja’abis, had a bedroom, a living room, a bathroom and a kitchen.

Israel demolishes most Palestinian-owned property in Jerusalem under the pretext that the structures were built illegally, meaning without Israeli-issued construction permits. However, Israeli authorities almost exclusively issue construction permits to Israeli Jewish neighborhoods and settlements.

This is because the city has not approved an urban plan for East Jerusalem and zones only 8 to 13 percent of the area as for Palestinian residential construction.

In recent years, only eight percent of all building permits in the city were issued to Palestinian neighborhoods, according to the Israeli human rights group Ir Amim. As a result, Palestinians build without permits to avoid overcrowding.

Related From December 2018:
169 Structures Demolished in East Jerusalem This Year