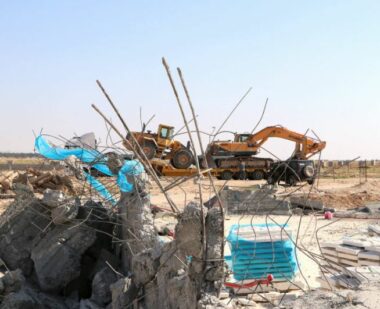 Media sources said the demolished homes, and structures, are owned by Palestinians from Sawarka and Nawawra families.

The Israeli army claimed the demolished buildings were constructed without a permit from the “Civil Administration Office,” the administrative branch of the illegal occupation of the West Bank.

Jihad Abu al-‘Asal, the governor of Jericho and Northern Plains, denounced the Israeli violations, and described them as an attempt to change the geography and demography in the area.

“The ongoing demolitions, violations, and the organized forcible transfer, displacement, of the Palestinians, are part of Israel’s serious violations against our people,” he said, “We call on regional and international organizations, human rights groups, to intervene and force Israel to comply with international laws and human rights treaties.