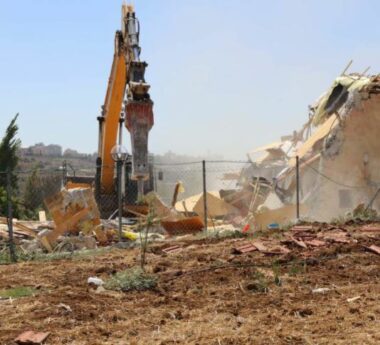 The soldiers also demolished a 35 square/meter structure, owned by Hatem Makhamra, in the at-Tiwani area, east of Yatta.

The soldiers also demolished a structure, owned by Jalal al-‘Amour, in Saroura area. The Palestinian and his family live in a cave in the area, due to Israeli restrictions on constructions.

Rateb Jabour, the coordinator of the National and Popular Committee against the Annexation Wall and Colonies, said the soldiers also demolished two residential structures, in Khallet ad-Dabe’ area, in Masafer Yatta.

Jabour added that the demolished brick and tin structures are owned by Jaber Ali Dababsa and his brother Amer.

In addition, Israeli bulldozers destroyed a water network used by Palestinians from Safi area, east of Yatta, only one week after handing the Palestinians the demolition order.

It is worth mention that Israel has already handed more than 16 demolition orders in the area, this month alone; seven structures have been demolished.

Israel has been escalating the violations in the area, by demolishing home and structures, as part of the attempts to occupy the lands to expand the illegal colonies of Karmiel, Avigal, Givat Avigal and Ma’on.

In related news, the soldiers handed a demolition order targeting an agricultural hothouse, east of Qalqilia, in northern West Bank.

The hothouse, used for planting fruits and vegetables, sits on a dunam of land in Jayyous village, east of Qalqilia, and is owned by Moath Wajeeh Khaled.