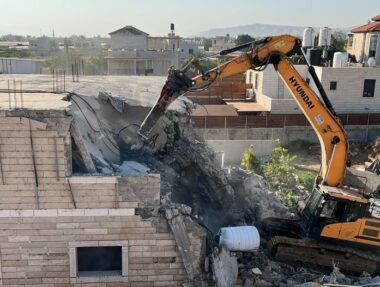 The soldiers also demolished another home, owned by Amjad Adel Edrees, in the same area as the first demolished home.

Furthermore, the soldiers handed demolition orders targeting thirteen homes in the Al-Matar area and delivered warnings to 67 homes, ordering the Palestinians to file all needed documentation with the “Civil Administration Office,” the administrative branch of the illegal occupation.

In Tubas, in the northeastern West Bank, the soldiers photographed several structures and dirt roads in the Ar-Ras al-Ahmar village, an issue that raised fears among the locals of impending demolition.