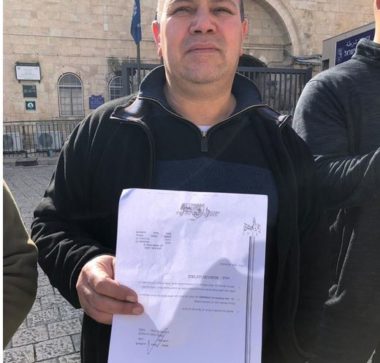 The Israeli army and police have issued orders targeting five guards of the Al-Aqsa Mosque, in occupied Jerusalem, and one Fateh movement official, denying them access to the holy site for periods ranging between four and six months.

Firas ad-Dibis, the head of the Waqf and Islamic Endowment Department, said the soldiers handed the warrants to the five guards, identified as Fadi Oleyyan, Lu’ay Abu as-Sa’ad and Ahmad Abu Alia, denying them access to the mosque and its compound for six months, in addition to Salman Abu Mayyala, who received an order for four months,

He added that the army also handed a six-month order denying Awad Salayma, a member of the regional Council of Fateh movement, access to Al-Aqsa for six months.

Sheikh Azzam Khatib, the general director of the Jerusalem endowment and al-Aqsa mosque affairs department, slammed the Israeli orders, describing them as arbitrary and illegal.

He stated that the army and the police are punishing civilian workers who serve in the Al-Aqsa compound, and are just carrying vindictive acts against them for intercepting the provocative tours of dozens of colonialist settlers, and armed soldiers, into the holy site.

Khatib added that Jordan was informed about the latest violation, and that the department will be filing appeals against the illegal warrants.

Last week, the soldiers summoned for interrogation many guards of the Al-Aqsa Mosque, especially after the police closed the Dome of the Rock mosque, Monday, and prevented the guards from entering it.