Army Detains A Palestinian, Denies Him Access To Al-Aqsa For Two Weeks 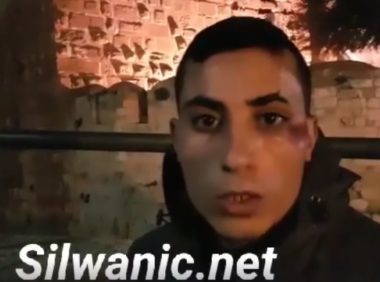 Israeli soldiers detained, Thursday, a young Palestinian man, and an issued order preventing him from entering the Al-Aqsa Mosque compound, in occupied Jerusalem, for two weeks, the Wadi Hilweh Information Center In Silwan (Silwanic) has reported.

The Palestinian, identified as Bahjat ar-Razem, from Jerusalem, was taken prisoner by the soldiers, who took him to a military base, and handed them the order, before releasing him a few hours later.

It is worth mentioning that, two days ago, the soldiers detained and repeatedly assaulted the young man, causing various lacerations and bruises, after stopping him at Bab ar-Rahma gate, in al-Aqsa.

He was one of many Palestinians who were attacked by the soldiers, and many of them were also taken prison.

“I was praying with many others in the al-Aqsa mosque, before the soldiers assaulted me, repeatedly, even after handcuffing me, they beat me up again, and moved me to a hospital, then I was later released,” he told Silwanic, “I will have to go to court tomorrow morning at 9:30 for a hearing.”

It is worth mentioning that the soldiers abducted, overnight until morning hours Thursday, twenty-one Palestinians from their homes, in several parts of the occupied West Bank.

In related news, dozens of illegal colonialist settlers and officers invaded, Thursday, the courtyards of the Al-Aqsa Mosque and conducted provocative tours after preventing the Palestinians from entering the holy site’s compound.