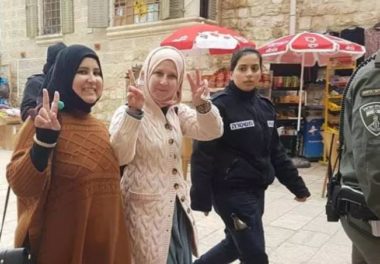 Israeli soldiers abducted, on Tuesday afternoon, three Palestinian women while leaving the Al-Aqsa Mosque, through the Gate of the Tribes, in occupied East Jerusalem.

They added that the soldiers took the three abducted women to a nearby police base.

Dr. Hanan Ashrawi, a member of the Executive Committee of the Palestine Liberation Organization (PLO) warned that the escalating Israeli violations against the holy sites, including the closure of the Al-Aqsa Mosque gates a day earlier, in addition to the frequent invasions into Al-Aqsa, and the latest assaults and abductions of many worshipers, including women, would only lead to further tension.

Dr. Ashrawi added that the Israeli escalations against the Palestinians, and the holy sites in occupied Jerusalem, are the direct outcome of America’s complicity, “especially the illegal and immoral recognition of Jerusalem as the unified capital of Israel, and the opening of the U.S. Embassy to the city.

“All of this is dragging the area into serious escalation,” she stated, “Israel and the ongoing U.S. support to its violations are dragging the region into a religious war.”

Dr. Ashrawi also denounced the illegal takeover of a Palestinian home, owned by members of Abu Assab family, who were forcibly removed from their property, in addition to being repeatedly assaulted.

“Israel is ongoing with its illegal polices of ethnic cleansing and displacement of the indigenous Palestinian people from their occupied city,” she stated, “It is also isolating them and destroying their homes, to replace them with illegal colonialist settlers.”