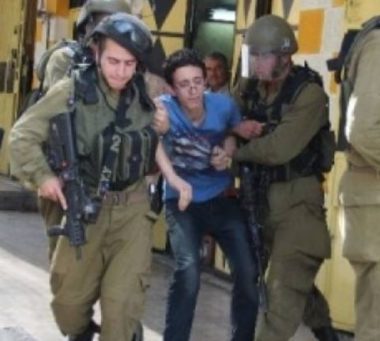 The Palestinian Prisoners’ Society (PPS) has reported that Israeli soldiers abducted, overnight until morning hours Thursday, twenty-one Palestinians from their homes, in several parts of the occupied West Bank.

The soldiers invaded and violently searched dozens of homes across the occupied West Bank, including East Jerusalem, and interrogated many Palestinians while inspecting their ID cards.

In Ramallah, in central West Bank, the soldiers searched several homes and abducted Adnan Khamis Suleiman, while Montaser Salama was abducted from his home in Jericho.

In addition, the soldiers invaded homes and Qalandia refugee camp, north of Jerusalem, and abducted a child, identified as Ahmad Nasser Adawi, 15.

On Wednesday at night, the soldiers abducted two young men, identified as Emad Abu Sneina and Mohammad Shaweesh, while leaving the Al-Aqsa Mosque in Jerusalem.

In related news, dozens of illegal colonialist settlers and officers invaded, Thursday, the courtyards of the Al-Aqsa Mosque in Jerusalem and conducted provocative tours after preventing the Palestinians from entering the holy site’s compound.