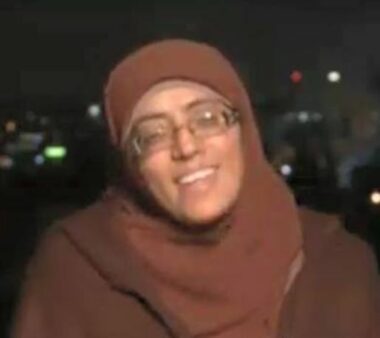 Israeli soldiers detained, Sunday, a Palestinian woman near Bab al-Asbat (Lions’ Gate), one of the gates of the Al-Aqsa Mosque in occupied Jerusalem, and invaded a home in Bab Hotta in the Old City.

Local sources said the soldiers abducted Khadija Khweiss, 43, while she was walking near Bab al-Asbat, and took her to an interrogation facility in Jerusalem.

Khadija was interrogated for several hours and was released after the soldiers handed her an order denying her access to Al-Aqsa Mosque and its surrounding areas for one week.

She is one of many Palestinian women who have been frequently abducted, detained, and interrogated by the Israeli army and the police for nonviolently protesting the ongoing invasions and violations by the soldiers and the colonialist settlers into the courtyards of the Al-Aqsa Mosque.

During these invasions, the army and the police assault the Palestinian worshipers and force them away from the holy site, and its courtyards, to facilitate the provocative tours carried out by illegal colonialists.

In related news, the soldiers invaded a home, owned by members of the Seder family in Bab Hotta, and interrogated the family while searching the property.