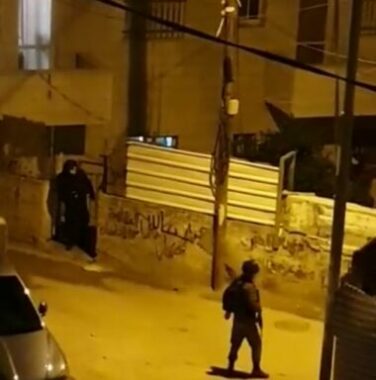 Israeli soldiers abducted, on Monday at dawn, nineteen Palestinians in several parts of the occupied West Bank, during extensive and violent searches of homes and buildings.

In Nablus, in northern West Bank, the soldiers abducted Omar Abdul-Rahim Hanbali and Mohammad Eshteyya in addition to Dr. Mustafa Shonnar, a lecturer at the Najah National University.

In the Jenin refugee camp, the soldiers searched a few homes and abducted Ahmad Mohammad Shaqfa.

In Bethlehem, south of the occupied capital, Jerusalem, the soldiers searched many homes in the Deheishe refugee camp, south of the city, before abducting Wael Khalil Salem, 40, Tareq Ziad Arafa, 17, Ali Yousef Arafa, 28, and brother Othman Arafa, 25, in addition to Toqai Saleh Manasra, 25, who was taken prisoner from his home in Doha town, southwest of Bethlehem.

In Hebron, in southern West Bank, the soldiers abducted Jibril Abu Turki from his home in the Khirbat Qalqas area, south of the city.

The soldiers also installed roadblocks at the northern roads of Hebron city, in addition to the main entrance of Sa’ir, Yatta, and Halhoul towns, before stopping and searching dozens of cars and interrogated the Palestinians while inspecting their ID cards.

In Jerusalem, the soldiers abducted Wisam Kanaan Khatib, Maher Mteir, Islam Ismael Ibrahim, and Amir Ibrahim, from their homes in Kafr Aqab neighborhood, north of Jerusalem, in addition to Anata and Hizma towns, northeast of the city.

During the invasion into Kafr Aqab, the soldiers attacked Palestinian protesters with a few live rounds and teargas bombs, causing many residents to suffer the effects of teargas inhalation.