Army Detains Many Palestinians from the Occupied West Bank 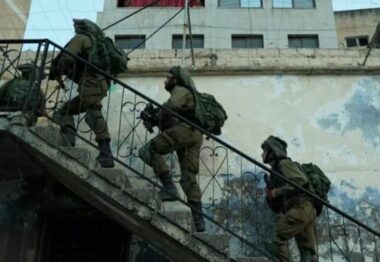 Israeli forces detained, on Wednesday at dawn, several Palestinian civilians from their homes in various parts of the occupied West Bank, the Palestinian News and Information Agency (WAFA) reported.

In the northern part of the West Bank, soldiers stormed and ransacked the home of two young men in Jaba‘ town, south of Jenin before abducting them.

Soldiers invaded the northern West Bank town of Sanniriya, south of Qalqilia, storming the home of Nimer Abdel Karim Younes before detaining him, taking him to an unknown location.

In addition, the army stormed the northern city of Tulkarem, and raided the home of a former prisoner, identified as Mustafa Omar Mustafa Odeh, 44, before detaining him.

In the northern West Bank city of Nablus, soldiers invaded the al-Masaken al-Shabiya neighborhood, and detained the Chairman of the Board of Directors of the Qamat Foundation for Documenting the Palestinian Struggle, identified as Anas Samir Al-Osta.

Israeli police forces detained one young man from the al-‘Isawiya neighborhood, and another from Silwan neighborhood in the occupied city of East Jerusalem.

In the southern part of the West Bank, Israeli troops invaded and searched a civilian home in the village of al-Ibayyat, east of Bethlehem, and detained a teenager.

Soldiers also stormed and ransacked the homes of Mahmoud Musa Abu Turk, 24, from the southern West Bank city of Hebron, and Ezz El-Din Jabr Odeh, 27, from Deir Samet, southwest of Hebron before abducting them, taking them to an unknown location.

Furthermore, local sources reported that the army detained four young men from the central West Bank village of Bi’lin, west of Ramallah, after storming their homes, adding that three family members were shot and injured by army gunfire.