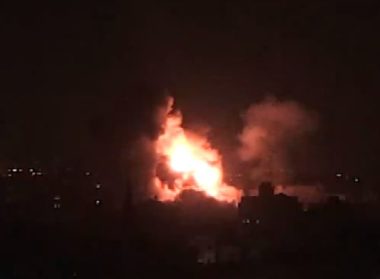 Israeli soldiers fired, on Saturday night after midnight, a few missiles into a site in the besieged and impoverished Gaza Strip, causing damage, after the army claimed that two shells were fired from the coastal region. The army also revoked the permits of 500 merchants in addition to reducing the fishing zone.

Israeli war jets and drones were also seen and heard flying over several parts of the coastal region.

The Israeli army claimed that it was retaliating to homemade shells that were reportedly fired from Gaza into nearby settlements.

In a statement, the Israeli army also said it has decided to revoke the permits of 500 Gaza merchants, which will prevent them from leaving the Gaza Strip on their way to Jerusalem or the rest of the occupied West Bank.

Furthermore, the Israeli Navy said it has decided to reduce the fishing zone allotted to Gaza Strip, for the second time since Wednesday, when it reduced it from 15 to 10 nautical miles, in addition to denying the entry of construction materials into the coastal region.