Army Injure Many Palestinians In Qaryout 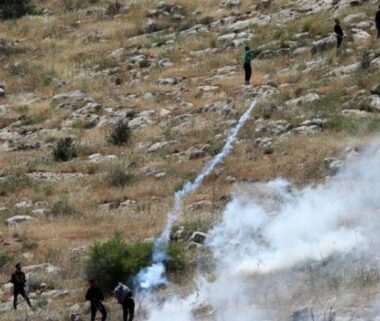 On Friday, Israeli soldiers injured many Palestinians in Qaryout village, south of the northern West Bank city of Nablus, after the army and illegal colonizers invaded the water spring area of the village.

Local sources said dozens of colonizers, accompanied by many soldiers, invaded the spring area after the army surrounded it and prevented the Palestinians from reaching it.

They added that the Palestinians protested the violation before the soldiers fired gas bombs and concussion grenades at them, causing many Palestinians to suffer the effects of tear gas inhalation.

Also, the soldiers injured many Palestinians during protests against the illegal colonialist activities in Beita and Beit Dajan, east of Nablus.

In addition, the army injured dozens of Palestinians during a nonviolent procession against the ongoing Israeli violations and the illegal takeover of Palestinian lands in Masafer Yatta, south of Hebron, in the southern part of the occupied West Bank.