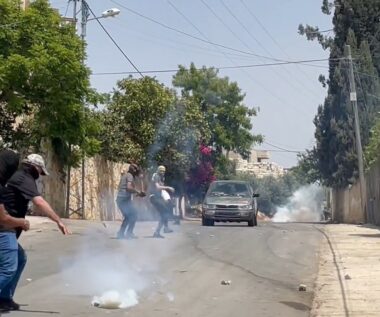 On Friday, Israeli soldiers injured eleven Palestinians and caused dozens to suffer the effects of tear gas inhalation during the weekly procession in Kufur Qaddoum, east of the northern West Bank city of Qalqilia.

Morad Eshteiwy, the coordinator of the Popular Committee in Kufur Qaddoum, said the Palestinians marched in the town, protesting the escalating Israeli crimes and violations, including the Friday dawn assassination of three young men in Jenin.

He added that the soldiers attacked the protesters, tried to abduct some of them, and ambushed many others in the olive orchards.

The procession started in front of the local mosque and was attended by hundreds of Palestinians who chanted for liberation, independence, and the ending of Israel’s colonialist activities in occupied Palestine.

Several protesters hurled stones at the soldiers while the army started firing gas bombs and concussion grenades, especially near the mosque.

Furthermore, the soldiers injured many Palestinians in Qaryout village, south of the northern West Bank city of Nablus, after the army and illegal colonizers invaded the water spring area of the village.

Also, the soldiers injured many Palestinians during protests against the illegal colonialist activities in Beita and Beit Dajan, east of Nablus.

In addition, the army injured dozens of Palestinians during a nonviolent procession against the ongoing Israeli violations and the illegal takeover of Palestinian lands in Masafer Yatta, south of Hebron, in the southern part of the occupied West Bank.