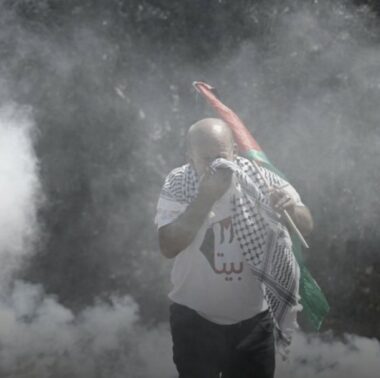 On Friday, Israeli soldiers injured many Palestinians during protests against the illegal colonialist activities in Beita and Beit Dajan, near Nablus, east of the northern West Bank city of Nablus.

The soldiers attacked the nonviolent protesters who marched on their lands, protesting the illegal takeover and ongoing colonialist activities.

They stated that the army fired many live rounds, rubber-coated steel bullets, and gas bombs at the protesters.

Ahmad Jibril, the head of the Emergency Department at the Nablus office of the Palestinian Red Crescent Society (PRCS), said the soldiers shot four Palestinians with rubber-coated steel bullets in Beita.

He added that another Palestinian was injured when he fell while the soldiers chased him during the procession.

Jibril also said that seven Palestinians suffered the effects of tear gas inhalation during the nonviolent process in Beit Dajan.

The Palestinians have been holding ongoing processions on their lands in Sbeih Mountain since May of last year after a group of illegal Israeli colonizers installed an outpost atop the mountain. During these protests, the soldiers injured thousands of Palestinians and killed several others, including children.