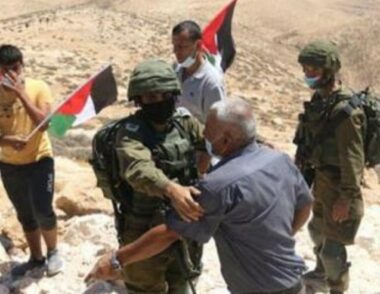 On Friday, Israeli soldiers injured dozens of Palestinians during a nonviolent procession against the ongoing Israeli violations and the illegal takeover of Palestinian lands in Masafer Yatta, south of Hebron, in the southern part of the occupied West Bank.

Fuad al-Amour, the coordinator of the Protection and Steadfastness Committees, said the Palestinians marched in the al-Ein al-Baida and al-Jawaya areas in Masafer Yatta, where the Israeli army is preparing a new segregated road for the colonizers.

Al-Amour said the procession was dubbed “Not another new Nakba in Masafer Yatta,” adding that the Palestinians carried Palestinian flags and chanted for national unity and independence.

The soldiers attacked the protesters with gas bombs and concussion grenades, causing dozens to suffer the effects of tear gas inhalation.

The Palestinians, accompanied by international peace activists, hold weekly processions in the area to protest the escalating Israeli violations, especially the ongoing attempts to demolish and displace many communities due to Israel’s ongoing illegal colonialist activities on Palestinian lands.