Army Injures A Child In Ni’lin, Causes Many To Suffer Effects Of Teargas Inhalation 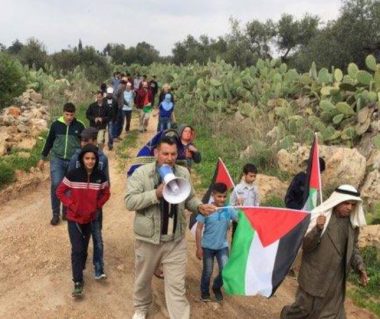 Israeli soldiers attacked, Friday, the weekly nonviolent protest against the Annexation Wall and colonies, in Ni’lin village, west of Ramallah in the occupied West Bank, wounding one child and causing many protesters to suffer the effects of teargas inhalation.

The procession started from the center of the village, when the locals, accompanied by Israeli and international activists, marched while chanting against the ongoing Israeli occupation, violations, illegal colonies and the Annexation Wall.

|Protest in Bil’in attacked by Israeli troops; two civilians abducted, including a child|

Medical sources said one child, only 14 years of age, was shot with a sponge-tipped bullet in his leg, and received the needed treatment.

The sources added that many protesters suffered the severe effects of teargas inhalation, and received the needed treatment by local medics.