Protest in Bil’in attacked by Israeli troops; two civilians abducted, including a child 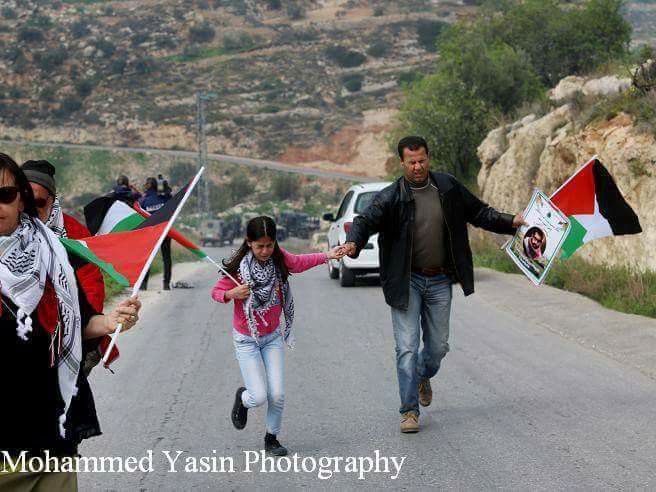 A weekly non-violent demonstration against the Israeli Wall and settlements in Bil’in village in the central West Bank was met with a massive show of force by the Israeli military, who fired tear gas canisters at children and blocked international observers from entering.

Two people were abducted by Israeli forces: 14-year old Khader Abu Rahma, who was photographed cowering in a grove of olive trees while Israeli troops stood above him, heavily armed; and Majdi Abu Rahma, 32, who was taken from his car, and his vehicle was seized. The local coordinator of the Popular Committee Against the Wall and Settlements, Abdullah Abu Rahma, told reporters that the Israeli soldiers installed checkpoints at the three roads leading into the village of Bil’in, blocking international observers and supporters from entering the village for the protest.

The checkpoints prevented anyone from entering the village, whether they were going there to pray at the mosque, be with family, engage in commerce or support the non-violent demonstrators. The villagers gathered near the center of town after mid-day prayers, and began their march down to the site of the Wall constructed in violation of both international law and an Israeli High Court ruling, right in the middle of land owned by residents of Bil’in.

During today’s protest, the marchers held up pictures of Basel al-Araj, who was killed by Israeli forces in Ramallah this week.

When they reached the gate in the Wall, Israeli troops in jeeps and armored vehicles were lined up in firing position.

The protesters chanted slogans in support of Palestinian hunger strikers, chanting the names of Jamal Abu al-Leil, who has been on hunger strike for 22 days, and Mohammad al-Qiq, who ended a 32-day hunger strike on Friday.

Bil’in has been a leader in the non-violent resistance movement in Palestine, with weekly non-violent protests held every Friday since 2003.