Army Injures A Palestinian In Bethlehem 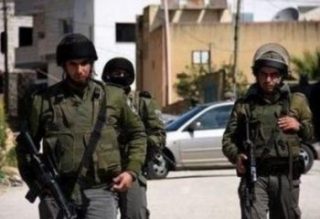 Palestinian medical sources shave reported, on Saturday evening, that one resident, from the southern West Bank district of Hebron, was shot with an Israeli army live round near Dar Salah village, east of Bethlehem.

The sources said the young man, identified as Nabil Shehada Sabarna, 27, was shot with a live round in his left leg, after the soldiers invaded Wad al-Hummus area, in Bethlehem. Sabarna is from Beit Ummar town, north of Hebron.

The soldiers also fired several gas bombs at many residents, who tried to move the wounded man to a hospital, causing many to suffer the effects of tear gas inhalation.

Earlier on Sunday at dawn, the soldiers kidnapped four Palestinians from the West Bank districts of Bethlehem, Hebron and Tulkarem, and searched a number of homes.