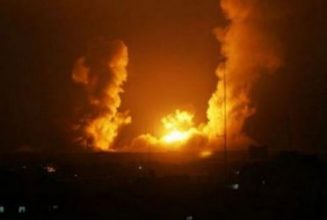 Israeli war jets carried out, on Saturday at dawn, two air strikes into Palestinian agricultural lands, east of Khan Younis and Rafah, in the southern part of the Gaza Strip. The Israeli army said the missiles were fired after an armed group in Gaza fired shells into the Eshkol Regional Council.

In addition, Israeli tanks fired three shells into Palestinian lands, east of Rafah city, in the southern part of the Gaza Strip.

Israeli drones have also been hovering over various areas of the coastal region, causing panic among the residents, fearing further escalation.

Israeli soldiers, stationed across the border fence, also fired many live rounds targeting several homes and structures, while more tanks and army vehicles were seen gathering near the border with Gaza.

The Israeli army said Palestinian fighters fired shells that landed in an open area in the Eshkol regional council of settlements, causing no injuries or damage.

Israeli Ynet News said this is the first rocket fire “that targets a civilian area over the past week,” rather than the shells fired at Israeli soldiers” operating near the border fence in Gaza.

Meanwhile, the Israeli Air Force fired many missiles targeting what it called Hamas centers in the southern part of the Gaza Strip, after the shells were fired into Eshkol.

Although various Israeli media agencies considered the shells into Eshkol to be an escalation in the recent tension in the situation, yet, the Israeli army have been targeting various civilian areas in Gaza.

One of the Israeli shells that targeted civilian areas, on Thursday, led to the death of a Palestinian woman, identified as Zeina al-‘Amour, after Israeli artillery shells struck al-Fakhari residential area, east of Khan Younis; one Palestinian, identified as Khozeima al-Farra, 21, was injured.