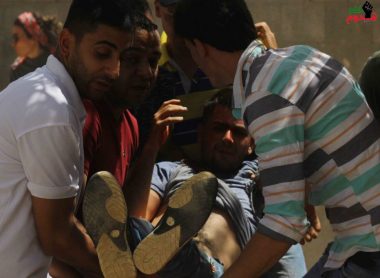 Israeli soldiers shot, Friday, a young Palestinian man with a rubber-coated steel bullet in his head, and caused many to suffer the effects of teargas inhalation, after the army attacked the weekly procession against the illegal Annexation Wall and colonies in Kufur Qaddoum town, east of the northern West Bank city of Qalqilia.

The soldiers invaded the town, and assaulted the weekly, before shooting a young man with a rubber-coated steel bullet in the head, causing a moderate injury.

The soldiers also fired dozens of gas bombs and concussion grenades, causing many Palestinians to suffer the effects of teargas inhalation.

The protesters chanted for liberation and independence, and against the illegal U.S. recognition of Jerusalem as the capital of Israel, in addition to moving the consulate to the occupied city.