Army Injures And Abducts One Palestinian in Silwad 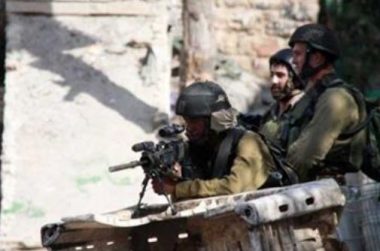 Israeli soldiers invaded, Wednesday, the town of Silwad, north of Ramallah, in central west Bank, and clashed with many youngsters, before abducting one Palestinian and causing many others, including children, to suffer the severe effects of teargas inhalation.

Abdul-Rahman Saleh, the head of Silwad Local Council, said the soldiers shot Ibrahim Hamed, and abducted him, and added that the extent of his injury remains unknown.

Saleh also stated that dozens of residents, including children and woman, suffered the severe effects of teargas inhalation, especially after the soldiers deliberately fired gas bombs at many homes in the town.

It is worth mentioning that the soldiers surrounded Silwad since early morning hours, and invaded it several times, leading to clashes.