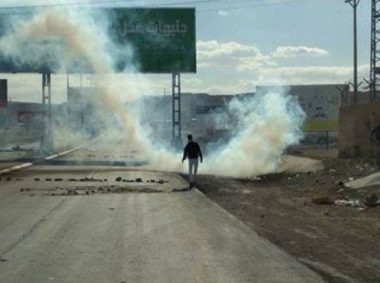 Israeli soldiers injured, Friday, dozens of Palestinians with rubber-coated steel bullets and gas bombs, at the main entrance of Jericho city, northwest of the Dead Sea in the occupied West Bank, after the army attacked Palestinian protesters.

Media sources in Jericho said the soldiers used excessive force against the nonviolent protesters, who marched against the ongoing occupation, while carrying Palestinian flags and chanting for the liberation of Palestine, and its occupied capital, Jerusalem.

Many Palestinians then hurled stones at the soldiers, who responded with more fire, the sources added.

The Palestinian Red Crescent said the soldiers shot eighteen Palestinians with rubber-coated steel bullets and caused twenty-six others to suffer the effects of teargas inhalation.