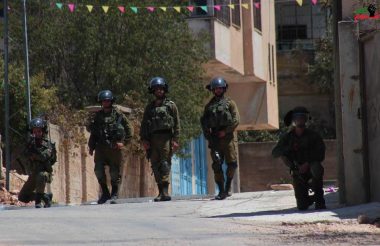 Israeli soldiers attacked, Friday, the weekly nonviolent procession against the Annexation Wall and Colonies, in Kufur Qaddoum village, east of Qalqilia, in the northern part of the occupied West Bank, and injured eight Palestinians, including a child, in addition to a Norwegian peace activist.

He added that the soldiers injured eight Palestinians, including a child identified as Mo’men Morad, 8, in addition a Norwegian woman.

The Norwegian woman, identified as Christine, said she went to the protest thinking that she would be “somewhat safe being a Norwegian, but the Israeli soldiers shot me with a rubber-coated steel bullet from a close range.”

When asked what her message to the Palestinians is, she said “I don’t know how you do this every day, just stay strong, and keep rebelling, and inshallah one day Palestine would be free.”

Three of the wounded Palestinians were rushed to a local hospital, while the rest received treatment by local medics.

The soldiers also invaded homes, and tried to ambush the protesters from one of the homes the military stormed and occupied.

Eshteiwi called on the International Community, in addition to various legal and human rights groups to intervene, and end the escalating Israeli assaults and violations.