Army Injures Four Palestinians, Abduct One Of Them, In Nabi Saleh Near Ramallah 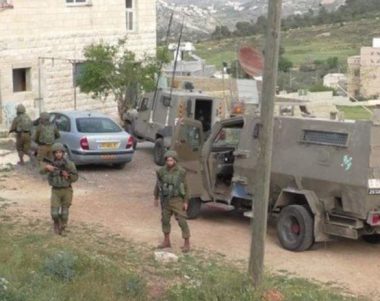 Palestinian medical sources have reported that Israeli soldiers shot, Monday four young men, assaulted and abducted one of them, after the army invaded Nabi Saleh village, north of the central West Bank city of Ramallah, and attacked protesters.

The sources said the army shot three Palestinians with live fire in their legs, before locals rushed them in private cars to Salfit governmental hospital, suffering moderate wounds.

The soldiers also shot another Palestinian, and assaulted him despite his wounds, before abducting him.

The Health Ministry in the West Bank said the Palestinian District Coordination Office was informed by the Israeli side that the Palestinian was shot with a rubber-coated steel bullet in his neck and is in a stable condition.

Dozens of Palestinian suffered the effects of teargas inhalation, especially since the soldiers fired a barrage of gas bombs at the protesters and homes in the village and received the needed treatment.