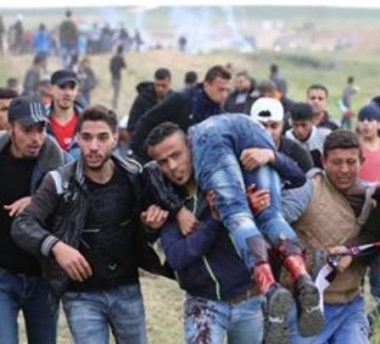 Israeli soldiers attacked, Monday, dozens of Palestinian protesters on their lands near border areas, in several parts of the Gaza Strip, and injured twelve Palestinians with live fire, in addition to causing dozens to suffer the effects of teargas inhalation.

Medical sources said the soldiers shot two Palestinian, east of Jabalia, in the northern part of the Gaza Strip.

They added that the army shot eight Palestinians, also with live fire, east of Gaza city.

Another Palestinian was shot in Khuza’a village, east of Khan Younis, in the southern part of the Gaza Strip, and one east of al-Boreij, in central Gaza.

Dozens of Palestinians suffered the effects of teargas inhalation and received the needed treatment.

Media sources in Gaza said many Palestinian protesters burnt dozens of tires across the border fence, and used mirrors to disrupt the soldiers’ vision, especially sharpshooters.