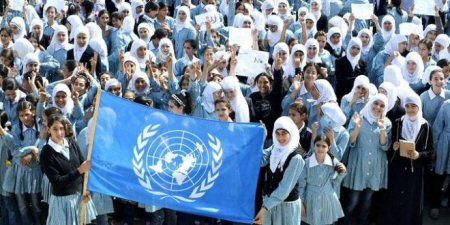 With its unprecedented pledge of USD 50 million to UNRWA at a recent ministerial conference in Rome, Qatar will become one of UNRWA’s top donors and will have a major impact on the Agency’s ability to continue its vital services to the vulnerable Palestine refugee community during this period of dramatic financial crisis.

PNN reports that, at an extraordinary ministerial conference on 15 March, entitled “Preserving Dignity and Sharing Responsibility – Mobilizing Collective Action for UNRWA,” Qatar made the largest pledge, which will safeguard Palestine refugee children’s access to education in the West Bank, Gaza, Jordan, Syria and Lebanon for the remainder of the current academic year as well as other core and essential services the Agency provides to Palestine refugees in the Middle East.

UN Secretary General Antonio Guterres, who was present at the conference, praised Qatar for its announced funding to UNRWA saying in a statement, “I sincerely thank the Emir for Qatar’s generous contribution in support of Palestine refugees.”

Foreign Minister Sheikh Mohammed Al-Thani said it was important for Qatar to fund the essential services of UNRWA: “In affirmation of the State of Qatar’s steady support policy towards the United Nations Relief and Works Agency for Palestine Refugees, the State of Qatar announced the donation of US$ 50 million to enable UNRWA to provide the necessary services to Palestine refugees.”

In response to this outstanding pledge, UNRWA Commissioner-General, Pierre Krähenbühl expressed gratitude. “I applaud Qatar for translating its political commitment into action and for its support to the Palestine refugee community in the region” and he added : “I am deeply and sincerely thankful to the government for this remarkable announcement and to His Excellency Sheikh Mohammed bin Abdulrahman bin Jassim Al-Thani for his strong trust in UNRWA. ”

The partnership between UNRWA and the State of Qatar has been developing for years and with this unprecedented donation will now enter a new phase, with a significant focus on education, including emergency education, particularly in Syria and Gaza.

UNRWA is confronted with an increased demand for services resulting from a growth in the number of registered Palestine refugees, the extent of their vulnerability and their deepening poverty. UNRWA is funded almost entirely by voluntary contributions and financial support has been outpaced by the growth in needs. As a result, the UNRWA Programme Budget, which supports the delivery of core essential services, operates with a large shortfall. UNRWA encourages all Member States to work collectively to exert all possible efforts to fully fund the Agency’s Programme Budget. UNRWA emergency programmes and key projects, also operating with large shortfalls, are funded through separate funding portals.

UNRWA is a United Nations agency established by the General Assembly in 1949 and mandated to provide assistance and protection to some 5 million registered Palestine refugees. Its mission is to help Palestine refugees in Jordan, Lebanon, Syria, West Bank and the Gaza Strip achieve their full human development potential, pending a just and lasting solution to their plight. UNRWA services encompass education, health care, relief and social services, camp infrastructure and improvement, protection and microfinance.