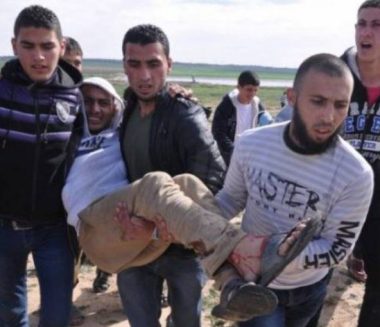 Israeli soldiers shot, on Monday morning, four Palestinians with live fire, east of the al-Boreij refugee camp, in central Gaza, and two others near Khan Younis and Jabalia, in the southern and northern parts of the coastal region.

Media sources said the soldiers fired many live rounds at Palestinian protesters, who started gathering near the border fence.

They added that the soldiers shot two young men with live rounds in their legs, and two others, also with live fire, east of Jabalia in northern Gaza, and east of Abasan al-Jadeeda, east of Khan Younis, in southern Gaza.

Earlier Monday, several Israeli military drones fired, Monday, dozens of firebombs at the Palestinians and the Great Return March tents, while the military started disrupting and jamming communications networks in the Gaza Strip.

Furthermore, several Israeli military vehicles, including armored bulldozers, advanced into Palestinian lands across the eastern borders of the Gaza Strip, and bulldozed various sections in addition to installing sand hills.

The Palestinians are marking the Nakba Day when Israel was created in the historic land of Palestine in 1948.

1.4 million Palestinians lived in 1,300 towns and villages all over historical Palestine. More than 800,000 of the population were driven out of their homeland to the West Bank and Gaza Strip, neighboring Arab countries, and other countries of the world.