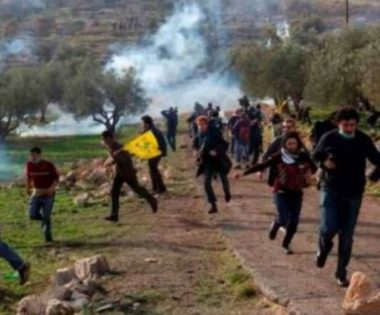 Israeli soldiers attacked, Friday, the weekly nonviolent procession against the illegal Annexation Wall and Colonies, in Bil’in village, west of the central West Bank city of Ramallah, wounding many protesters, and causing fire in olive orchards.

The protest was held by locals, accompanied by Israeli and international peace activists.

The Popular Committee in Bil’in said the protest started from the center of the village, and headed towards the Annexation Wall in Abu Lemon area.

It added that the protesters chanted for the liberation of Palestine, the removal of the illegal wall and colonies, national unity, and also marked the 52 anniversary of the “Naksa” when Israel occupied the rest of Palestinian (the West Bank, the Gaza Strip and East Jerusalem), during the six-day Israeli war.

The protesters also called for implementing the Right of Return of the refugees, and the release of all political prisoners, held by Israel.

The soldiers fired a barrage of gas bombs and concussion grenades at the nonviolent protesters, causing many to suffer the effects of teargas inhalation, in addition to causing fire in the olive orchards.