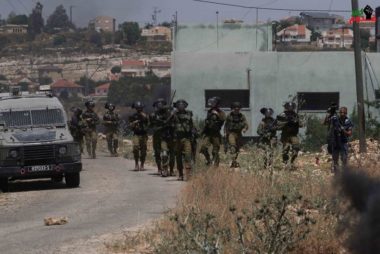 Israeli soldiers attacked, Friday, the weekly procession in Kufur Qaddoum town, east of the northern West Bank city of Qalqilia, and shot one Palestinian, in addition to causing many to suffer the effects of teargas inhalation.

Morad Eshteiwi, the coordinator of the Popular Committee against the Annexation Wall and Colonies in Kufur Qaddoum, said the soldiers resorted to the excessive use of force against the protesters, before some youngsters hurled stones at them.

He added that the soldiers fired live rounds, rubber-coated steel bullets, gas bombs and concussion grenades, shooting a young man in the leg, and causing many protesters to suffer the effects of teargas inhalation.